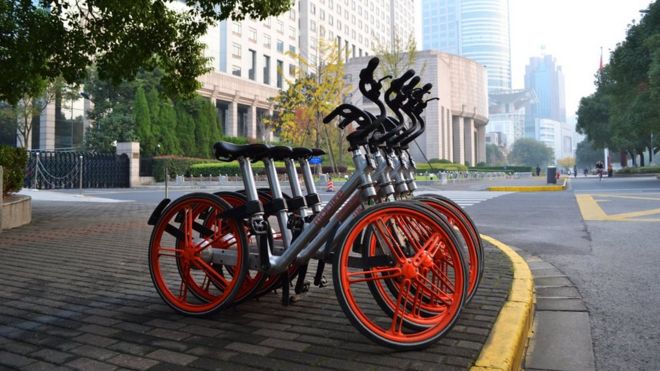 1,000 Mobikes have been scattered around the city centre as a new bike sharing scheme for Manchester and Salford has been launched. Manchester is the first area outside Asia to adopt the service, initially for a six-month trial but with a view to expand.

Mobike is the world’s first smart, dock-free bikeshare platform aimed at helping people make short trips across cities. The orange and silver aluminium machines have non-puncture airless tyres, a GPS tracker, built-in locks and a cashless smartphone app. The bikes are designed with chainless shaft transmission and durable disc-brake, they are hailed by their creators as ‘maintenance-free bikes’ with a four-year fix-free life span.

Bosses say they are ‘near impossible’ to vandalise and ‘pointless’ to steal. They have developed a credits system where users who defy the Mobike rules – park them in the wrong place for example – will be charged more to hire them. ‘Good users’, meanwhile, will be rewarded.

The bikes the brain child of Hu Weiwei, a Chinese entrepreneur.  She told the M.E.N at a cycling conference in Holland that she envisions Manchester becoming the ‘Shanghai of Europe’ – doing for bike-sharing on the Continent what Shanghai began in China. Welcomed by city leaders the hope is that they will help tackle congestion and pollution levels.

To use a Mobike subscribe to their app, pay the deposit, find your nearest bike & hop on! Visit the Mobike website

KPMG welcomes 200 graduates and apprentices joining the business, including its advisory, audit, pensions and tax practices throughout the North West.

Suzanne Kelly is an Implementation Manager for Handelsbanken. She has been a long term supporter of Ministry2Business and is part of Life Church Manchester.

Spotlight: Hannah Child “It’s a great privilege to be working in law”

Hannah Child is a trainee solicitor at DWF LLP. She has served as a trustee with M2B since 2017 and is passionate about helping people in business by bringing positive change to their organisations.